Helium Ion Microscopy (HIM) is providing best resolution Nobel gas focused ion beam (FIB) based imaging and nanofabrication capabilities[1, 2] In this lecture I will introduce the fundamentals of the technique including the gas field ion source (GFIS) and auxiliary instrumentation. The introduction will also briefly cover new developments with respect to ion beam based analysis in the HIM such secondary ion mass spectrometry (SIMS), ionoluminescence, and scanning transmission ion microscopy (STIM). In the second part I will illustrate the application of HIM for its original purpose namely high magnification imaging of in particular non-conductive samples. This capability makes the method extremely useful for the uncoated imaging of biological samples such cells, bacteria and viruses. I will also show how channeling can be exploited to obtain crystallographic information with sub-nanometer sensitivity and information on buried structures can be obtained. The final part will cover different aspect of GFIS based nanofabrication. Special emphasis will be put on low fluence materials properties modification with only negligible material removal. Examples in the part will include the modification magnetic, superconducting, electrical and optical properties in metals, semiconductors and 2D materials. However, GFIS based nanofabrication has also successfully been used for focused ion beam induced deposition (FIBID), high resolution resist patterning and high fidelity nanostructure fabrication. 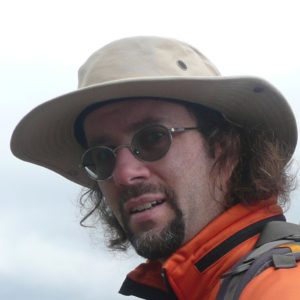 Gregor Hlawacek got a PhD in Materials Science in 2007 from the Institute for Physics at the Montanuniversität Leoben in Austria. The topic of his thesis was Molecular growth mechanisms in para-sexiphenyl thin film deposition. After a 1.5 year PostDoc at the same institution, in 2009 he moved to the University of Twente in the Netherlands where he started to perform Helium Ion Microscopy (HIM). Being one of the first users of this new method he was involved in the design of a new UHV vacuum chamber for this instrument and the development of ionoluminescence for the characterization of defects created by the highly focused ion beam. In 2014, he moved to the Helmholtz Zentrum Dresden Rossendorf and since then is in charge of the Orion NanoFAB HIM and the development of high resolution ion beam analysis methods for HIM such as RBS and TOF-SIMS. In addition, HIM has successfully been used for the analysis or the spatially resolved modification of a number of material systems. Since 2019 he is the group leader of the Ion Induced Nanostructures group at the Ion Beam Center and responsible for the low energy ion activities at the institute.

Gregor Hlawacek received the AT&S award of the Austrian Physical Society for the best PhD thesis in solid state physics in 2008. He is co-organizers of several HIM and FIB related meetings, conferences and sessions at large international conferences (AVS, M&M, EU-F-N, HeFIB, . . . ) and organized the HeFIB meeting in 2018. He received funding through the European Commissions H2020 program (IONS4SET, npSCOPE), the Leverhulme Trust (picoFIB), the Luxembourg national research fund (STHIM) and the DFG. Recently, he has successfully applied and been granted a COST Action on Focused Ion Technology for Nanomaterials connecting more than 80 groups in Europe. Gregor Hlawacek has published over 70 papers in peer reviewed journals with more than 1500 citations. He also published 9 book chapters and is editor on the first full book on Helium Ion Microscopy released in 2016. He currently supervises three PhD students and has successfully promoted three more in the past.