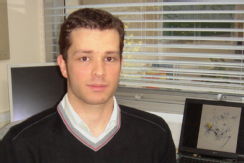 Alberto Rodríguez obtained his PhD in 2005 in Universidad de Salamanca, with a dissertation on the properties of one-dimensional disordered quantum systems. After a short period as research assistant in Salamanca, he moved to the University of Warwick and became a member of the Disordered Quantum Systems Group, led by Prof. Rudolf Roemer. Since 2011 he works in the Quantum Optics and Statistics Group of Albert-Ludwigs-Universitaet in Freiburg, Germany, where he currently holds a position of Akademischer Rat. His current research interests are centred around the interplay of disorder and interactions, ranging from cold-atom ensembles and condensed matter to atomic driven systems.

"Multifractal analysis of the metal-insulator transition in the 3D Anderson model I: Symmetry relation under typical averaging"
Louella J. Vasquez, A. Rodriguez, Rudolf A. Roemer
Phys. Rev. B 78, 195106 (2008)''

Simple model for a quantum wireIII: Transmission in finite samples with correlated disorder
José M. Cerveró and A. Rodríguez
European Physical Journal, B43, 543-548 (2005)''