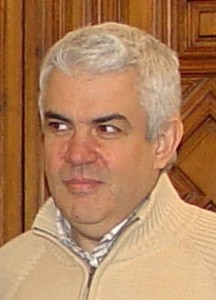 Jesús Enrique Velázquez-Pérez pursued his PhD studies at the Institut d’Electronique Fondamentale (IEF) Université Paris-XI, Orsay, France in the field of device simulation using Monte Carlo, MC, models from 1987 to 1990. In 1990, he joined the Departmento of Física Aplicada of the Universidad de Salamanca (USAL), where he is currently Professor Titular of Electronics. From his start at the USAL, he focused his research on noise modelling of semiconductor devices using microscopic technique based on MC techniques. The in-house MC simulation software was extended in the mid of the 90s to allow the study of DC, AC and noise performances of advanced heterojunction transistors. From 1998 to 2004 he was also an invited researcher in the Electrical and Electronic Engineering Department of the Imperial College London, UK, working in the development of n-channel Si/SiGe MODFETs for low-power high-frequency applications. This work in was subsequently extended to the development of Si/SiGe MODFET plasma wave detectors.  J.E. Velázquez-Pérez has published more than 55 papers and over 85 conference contributions and holds one patent.