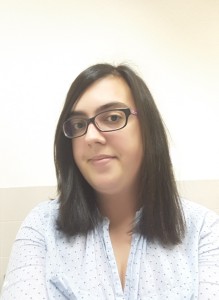 Paz Albares Vicente is a PhD student at the Department of Fundamental Physics in the University of Salamanca since 2016.
She was born in 1993, in Salamanca (Spain). In 2015 she graduated in Physics from the University of Salamanca and in 2016 she obtained her Master Degree in Theoretical Physics from the Complutense University of Madrid.
In October 2016, she started her PhD studies at the University of Salamanca and in July 2017 she got a PhD Grant awarded by the Junta de Castilla y León. Her main research interests are the integrability of nonlinear differential equations and its applications to physical and biological phenomena (especially those related to nonlinear waves in 2+1 dimensions).
Email:  paz.albares@usal.es
PUBLICATIONS
Spectral problem for a two-component nonlinear Schrödinger equation in 2 + 1 dimensions: Singular manifold method and Lie point symmetries
P. Albares, J.M. Conde, P.G. Estévez
Applied Mathematics and Computation 355 (2019) 585–594 (2019)''